Walter was my maternal Grandfather.  He was born September 15, 1913, in Corsica, PA to Thomas Edward and Catherine Maria Songer Clark.  He was one of seven children.  On May 11, 1935 he married Sarah Elizabeth Beveridge, with whom he adopted 2 children before he died April 26, 1968 at only 54 years old.
During his life he played the bagpipes and enjoyed celebrating his Celtic heritage.  At the graveside service at St. Ann's Church in Corsica, PA, a lone bagpiper played at the top of the hill.  Nobody in the family knew who it was, or who arranged it.
I don't know much about Walter, my mother was only 6 years old when he died.  I know he was a good man, though.  I know that after his parents died he and my grandmother took in his sister Edna, who was deaf and mute, and they cared for her for the rest of her life.  I also know that anyone my grandmother loved so much had to be a wonderful person. 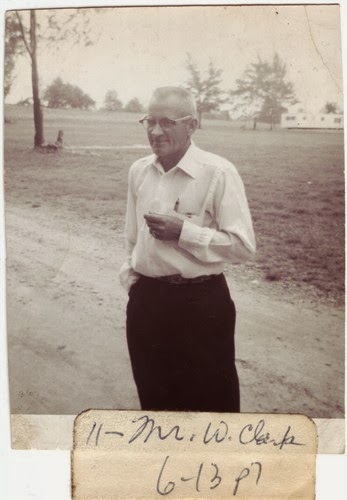 All I know about this picture is that it is my grandfather, that tag was glued to it when I found it, so I left it there, hoping someone, someday might be able to explain it to me.
Posted by Unknown at 11:46 AM No comments:

Email ThisBlogThis!Share to TwitterShare to FacebookShare to Pinterest
Labels: 52Ancestors

My maternal grandmother Sarah Elizabeth Beveridge was born February 26, 1913 to John Nelson and Sarah Elizabeth Caldwell Beveridge in Latrobe, PA.  She was the sixth of nine children.  On May 11, 1935 she married Walter Edward Clark, together they adopted two children before he died in 1968.  She remarried February 22, 1977 to Damond Reitz Stauffer, who died in 1980.

I was only 7 years old when she died, but I believe that she shaped much of who I am today.  I have memories of doing puzzles with her, and watching her favorite show Highway to Heaven.  She loved Michael Landon.

I miss you Gram. 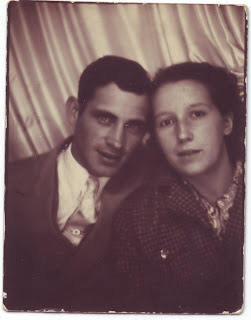 This is Sarah and her first husband Walter on their wedding day.
If anyone who reads this knew my grandmother and wants to share a story with me, I would love to hear from you!
Posted by Unknown at 7:28 AM 1 comment:

Email ThisBlogThis!Share to TwitterShare to FacebookShare to Pinterest
Labels: 52Ancestors

I started this blog to follow along with the 52 Ancestors in 52 Weeks Challenge Found at: http://www.nostorytoosmall.com/posts/challenge-52-ancestors-in-52-weeks/  I hope you'll play along!
Posted by Unknown at 6:18 AM No comments: